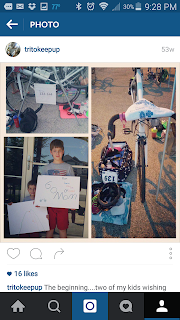 I couldn't sleep.  This had never happened to me before.  Over and over my mind kept asking, "How would I run this race if I couldn't get any sleep?".  Nerves were settling in hard and I knew that if I stayed up too long I might not follow through.  Four months of training and pushing myself would be all for nothing.

Fear after fear and one negative picture after another plagued my thoughts but fear of what?  I could not identify it.

I wasn't afraid of not finishing, I was confident in my endurance that no matter the time, the race would be completed.  I wasn't afraid of the route as I had mapped it out just a couple days before so that I would have an idea of what to expect.  What then kept me from drifting off into a much needed rest?

I believe it was a mix of anticipation and adrenaline.

Because of the how far away the race was we had to get up at 4:30am.  A time that was growing rapidly closer on the digital red numbers that glared at me mockingly.

Finally around 2:30am my body and my mind were at peace.

Amazingly I awoke at 4:30am refreshed and ready to go.  I attempted to eat and drink some water but the nerves were making that hard.  Thankfully Chris was driving which allowed my body to sit and prepare.  Mentally I began to envision the race...

Swim, massive amounts of people jump into the water and fight for their place to move.  One loop around, just like at practice.  Once on sand the swim cap and goggles would come off as I traveled to the transition place.  There I would quickly dry, put socks and shoes on and jump on the bike.

Bike, hill after hill and multiple car laden roads would take me on a trek not with any type of trail destination ahead.  All small town roads some without curbs would be my path.

Run, this was a trail run and the shaded areas would be most welcomed.  I would add my runners belt on after I dismounted and eat my Gatorade chews as I ran.

Importantly, after training without music I did decide to wear my hearing aids.  I had them tucked safely in my runner's belt for me to put in after the swim.

And then it was time.  I remember standing on the sand with my number written on my arm and my age on my leg full of nervous energy but invigorated from the excitement.  I was all alone yet surrounded by hundreds that were united by a similar goal.

We lined up in front of the water and then it began.

Swim:  I was kicked, punched and pushed in the water but nothing bad enough to stop my forward momentum.  I pressed on to get out ahead and away from the masses.  When I exited the water my family stood cheering me on with homemade signs and I waved warmly.

Transition 1:  I dropped my hearing aid.  I guess that should have been anticipated.  They are small and I was in a hurry.  I found it quickly though and was off on the bike.

Bike:  So many people passed me on the bike.  Even with my new road bike I could not keep up with their speed and leg strength.  I put up a respectable time but could tell I had a lot to learn in this area with regards to technique.

Transition 2:  Jello legs.  They were always present after dismounting the bike.  Most of the time in training I would just give up after a mile and call it good.  But today I knew that was not going to be enough.

Run:  Surprisingly I picked up my race in this area.  The jello legs faded about 1.5 miles in.  My only goal was no matter how tired I was that I would not stop running.  No, walking.  I held true to that even when I wanted to quit I would look ahead to those in front of me.  Age 50,45, 23....and think, I can keep going.

Finish line:  I could see it.  I got a surge of energy and sprinted to it.  I vaguely heard the announcer say my name and comment how I still had some fuel on the back end and was finishing strong.  A smile broke out on my face.  It was done, I had completed it and the most important part - I loved it. 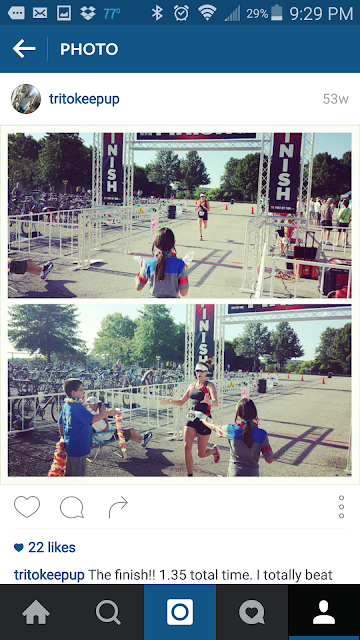