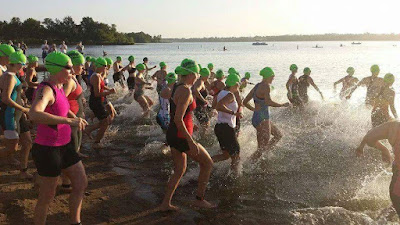 When I would talk about running a Triathlon the most popular response was, "I can't swim".  Their body language would instantly tense and the words would be spoken with their head shaking, eyes wide and a tiny hint of fear.  This consistent response confused me.  I truly never knew that so many people are not comfortable in the water.  A glance at any city pool would seem to prove the opposite but in this case my experience showed a different side.  It was such a frequent statement that part of me started to wonder if I should feel the same.  Herd mentality right?   However nothing about the water, other than sharks, scares me.  In fact, this was the part I felt suited me most. So with each fearful swimming declaration I would respond, I love to swim and shrug my shoulders.

I began my swimming journey in our small subdivision pool.  I would squeeze in a swim wherever my schedule would allow even if it was just 15 or 20 minutes.  To be fully prepared I carried my swimsuit around in my car.

The size of our the pool was not ideal and became a bit of an issue.  It felt like I was a goldfish in a small bowl swimming circles around the edge headed somewhere but going nowhere.  In complete contrast to the bike everything about the swim was predictable.  Over 50 laps back and forth, the turns so frequent that I would feel dizzy as I was swimming.

It was in one of those moments that my hearing finally became something I should consider on this journey.  I began to wonder if the dizziness was from more than just the size of the pool.  Each time I would exit the water my ears would ache slightly from the pressure and I would shake quite a bit of water out of them.  I hadn't even considered if I would even have my hearing aids with me during the race.

You see, up until that point my training had been for an imaginary goal.  I had not signed up for a Triathlon or even researched how the race worked, I just simply started to train.  Faith sometimes is funny like that.  I just did what I felt I was being called to do and the plans were nowhere in sight.

When I found my Triathlon I quickly realized some of my assumptions were wrong.

The first being that headphones in a Triathlon are not permitted.  OK, all of my bike and running training had been done listening to music or words on my earbuds.  When I read that in the Triathlon rules I was almost going to give up.  Silly huh?  I am dizzy after a swim and I press on.  I find out I can't wear headphones and I think, oh OK this isn't for me.

I am sure by now everyone understands just how important music is in my life.  One of the things I like most about exercise is the rhythm of the music as I move.  As a former dancer, music and working out go hand in hand.

When I read that the reason behind it was for cycling safety I started to wonder if I should be wearing my hearing aids in order to hear passing cars before they approach.  During that week I began riding and running without music with my hearing aids in.  I also went and purchased ear plugs for the water which made a large difference in the dizziness.  The size of the pool it seemed was not to blame.

Since I knew this race would not be in a beautiful pool but rather, a murky lake with no sides on which to rest when needed.   A friend suggested that I should start practicing in a lake during a special time set aside for triathlon runners.  Luckily several of our local lakes offered those options and so I set out one evening on an adventure.  The whole family came with and my hubby and kids played on the playground while I gave this lake thing a try.

This my friends was a pretty funny sight.

I showed up in my one piece "granny suit" as Chris calls it.  I wore my bright green kid goggles that are scratched an in need of repair along with my very obviously bought in a store swim cap.

To say I look like a novice would be being kind.  I appeared to be quite aptly, a fish out of water.

Summing up the area I saw 90% triathlon suits and multiple people in training groups.  The other 10% were men in well rather small swim suits.  Embarrassingly I had to ask the life guard what I was supposed to do.  She pointed to the far buoy on the right hand corner of the lake and then the equally as far buoy on the left side of the lake.  That, she said, was my path.

I waded in the water nervously keeping my eyes fixed ahead.  Then, when I could stand it no longer, I looked back to the playground where my family was.  I longed for their protection and security. Words of affirmation would have been richly welcomed.

This was shaping up to be a very humbling affair.

Just go for it my subconscious breathed.  And so, I did.

Diving in I began to swim without much site or planning.  Every so often I would stop and doggy paddle in order to make sure I was on the right path.   This wasn't about timing for me this was about practice and pushing boundaries.

Much like the bike path I enjoyed the swim way more than I expected. Yes, I was swimming towards a goal but the sand between my toes was only one of the perks.  Much deeper even then the lake was my repeated need to do things never done before.

As I exited the water I felt strong and good.  This was right.  It all felt so right.  I liked that.

I would practice the swim only three more times in the lake before race day.  Each time I felt more comfortable in the water and my time improved.  I no longer needed to glance back to my family before I waded in.  I would attack the water with force and determination.  Diving through it all, keeping my eyes fixed on the first buoy and then the next.  One punch at a time building my endurance physically and mentally. 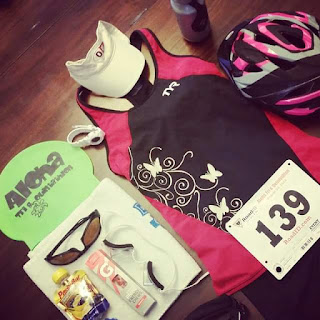 *During this time, after I finally committed to a race,  I purchased a road bike, triathlon suit and runners belt.  I did not get the top of the line in any of it but all of those items were needed and I felt that practicing with them would be helpful.