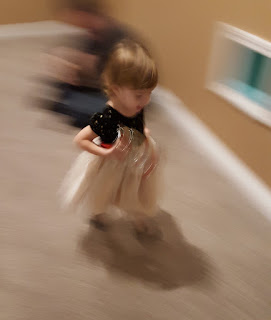 Over Christmas I captured this picture of my daughter running around in our basement.  I fell in love with it immediately.  There is no filter, no digital editing in fact the only change I made was to crop it slightly.  The reason I like this so very much is because it embodies the sound in my house.  As she moves at lightening speed through the house squealing and laughing her sound preceding and following her throughout.  In this picture you can almost see the sounds in the blur.  The natural essence of a child playing and it is almost in view, just about clear, almost certainly recognizable but simply not sharp or clear yet still very beautiful.

This is how I look at my ability to hear.  Almost in view, just about clear, almost certainly recognizable but simply not sharp or clear but beautiful in its own right because of the lessons I learn from the struggle.

Journeying on in continuation of my last post...Upon the frustrating realization that my hearing was not even up to my low standards I knew it was time to see the specialist again.

Grudgingly, I jumped through the insurance hoops and called to make my appointment with the incredibly busy Doctor who typically had a 6 month wait.  That day God had his hand on my call as I was able to get in on a cancellation that week.

It's a dream I told myself as I sat in the hearing room chair not being able to understand one word the audiologist was saying to me.  The earbud was securely in my ear and she was speaking but the comprehension was gone.  What in the hell was happening to me?  The anger pulsed through and my heart began to race a bit as I shook my head at word after word that made no sense.  After about the fourth or fifth one she paused.  The silence and the waiting spoke volumes.  Then unexpectedly the headphones clicked off and she entered the room her eyes meeting mine.  I am sorry her face and body seemed to say before she uttered a word.  She then explained that she would have to find a man's voice to read me the words and for now we would start with the beeps.  I nodded and took a deep breath.

This wasn't something new I reassured myself.   After all, my home life had foretold that there was an issue.  English speaking people were not speaking French right...but even still as it always was in this arena, I knew and yet I didn't want to believe.

She returned to her room and slowly the beeps began.  I wasn't sure how many I missed, I never am.  I cannot differentiate between my ringing and her ringing most of the time.  There was however another new disturbing trend becoming obvious as I listened, my left ear was not hearing the beeps as well as the right.  Up until this point with every test I have taken both ears pretty much operated in the same manner.  But now, it seemed that a greater shift was taking place in the left.

Finally the beeps were finished and she indicated that we would return to the frustrating task of me being able to have a conversation.  She put on a tape of a male voice saying the same words she uttered earlier in the session.  This time I could comprehend some of them but still not all.  It was apparent that she still was not satisfied with my responses because she asked me to take out the ear plugs, put in my hearing aids and face the large black speaker in the room.  I then listened to the male voice again with both ears, very loudly and I repeated back what was said to me as best I could.

I was released then, blessed freedom from that very small confining room.  She moved me into the patient area and there I waited quietly on the Doctor.

Once he joined me he checked out my ears, my chart and then held it up for me to see.  Part of the problem he said was that the hearing aids I have may not be adequate for my ears.  He began explaining that I may need to switch the end of them to something a little different.  He also confirmed that my left ear had significantly fallen more dramatically than the right.

It is important to note that they offer no explanation.  They never do.  In actuality there is no sympathy or concern.  I am not going to die, I do not feel bad, for all purposes this is more of a cosmetic issue.  Like deteriorating eyesight.   Those of you with glasses understand that when you go get your eyes checked the Ophthalmologist doesn't act concerned as your eyesight worsens because  it is expected that once it starts to go it will continue getting worse and worse.  In all my eye appointments I have never had anyone offer me an explanation as to why my eyesight is so bad or comfort me because of it.  In this way, they approach my ears the same.  They act as if I should just know they are going to get worse and it is just a fact.  That is why when he delivered the next bit of news he did so with as much compassion as a professor pointing to a hypothetical patient chart.

The culprit of my not being able to understand speech well was that I had lost another sound.  He pointed to the three "above ground sounds" so to speak from last appointment and then to the dots that appeared this time.  Only two remained above the threshold line.

I am fairly certain my breath caught in that moment.  In fact, more than even that dramatic motion I held that very breath for what seemed like an eternity.  My mind began to call out to the dying follicles, my faltering ears...where are you taking me now??

So I will try and explain this. You see my hearing has always been a partial loss, meaning that my high sounds have fallen well below what is considered normal but there were three low sounds still holding on in normal range.  Essentially, I did not need a hearing aid to help me in those areas, only the high notes.  And so my hearing aids had holes in them that allowed those sounds to occur in my ear naturally while helping me focus on the missing ones.  Brilliant really, the technology is so amazing.

But over the last two years one of my three good sounds dropped down to well below normal in both ears.  Essentially I lost it.  Another sound gone leaving me with just two low sounds that I can hear on my own.

It was really sticking in my gut this time.  The fear and uncertainty unnerving me and pointing their bright red arrow at the notion that there was no escaping this.

The Dr. assured me there was a quick fix for this problem to help my understanding and everyday life.  The new hearing aid I mentioned would be enclosed so that those two sounds, my last two sounds I heard on my own would be blocked.  The trade off, my understanding would increase.  Essentially, I could no longer rely on any of the hearing that I have naturally.

Two years and another sound gone.

Questions circled stubbornly in my mind.  Will it be four years and then all my notes will below normal?  Do I even have that much time?  What happens after that?   Why isn't there an explanation?

I asked the Dr. about a place I could learn sign language.  He said, "Oh, you won't ever need that.  We will always be able to help you hear with technology."

I don't understand that.  How will I be able to hear when all of my hearing follicles die?  I cling to it anyways.  The hope that in some manner sound will always find its way into my mind.

Later in the week my dad passed along an article from KU Med Center talking about how they have had success in re-growing the tiny hair follicles that control our ability to hear.  They are currently in the testing phase and it is very promising research.  Right now they are testing on fully deaf patients and the initial results are very encouraging.  I do not know if that will even be an option for me because they do not have a reason that my hairs have died and continue to die, they just are.  And even if they can regrow them, what is to say that my body won't kill them off once again?  So for now I stay on the course as God has given it to me.  I will use my hearing aids until they no longer work and when the time comes I will switch to a cochlear implant.  The time table is not mine to hold or my burden to bear.

So while in truth another sound is gone, I am not the cause and there are no preventative measures.  In those words I find freedom.

At the end of 2015 and beginning of 2016 I still remain grateful.  This year has tried to work me over and in some areas I have struggled greatly.  I continue to trust in God's plan for my life, seeking him first, putting my hope, heart and hearing in his hands because that is all I can do as the sounds slip away one by one.